The horoscope gives the Piscean-Scorpian bond a low love compatibility. Perhaps they can achieve a good friendship, but hardly beyond that. They are both water signs... , 2020-10-11 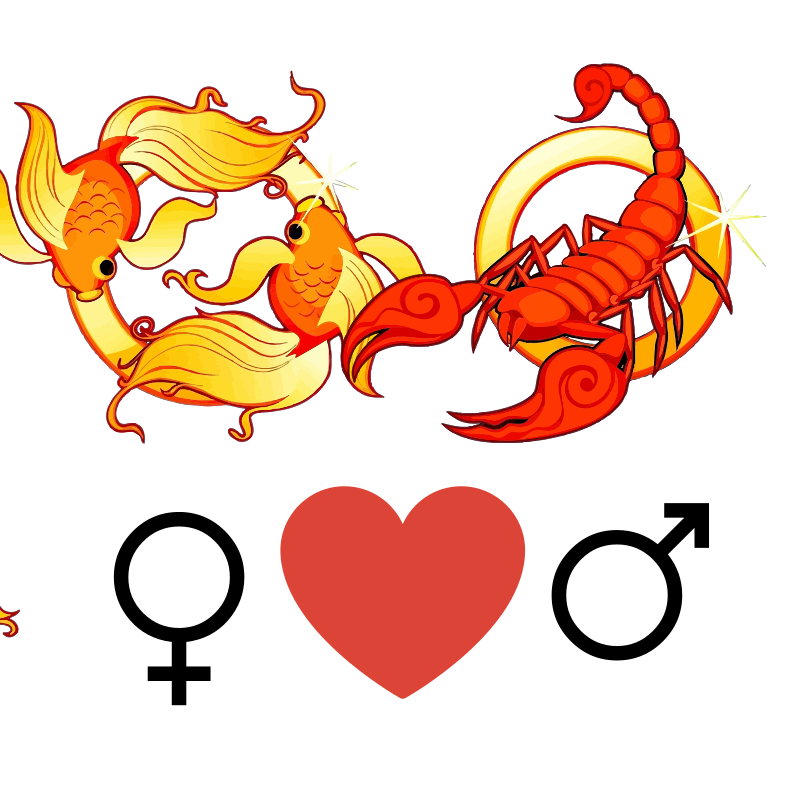 The horoscope gives the Piscean-Scorpian bond a low love compatibility. Perhaps they can achieve a good friendship, but hardly beyond that.

They are both water signs, so they have personality traits in common, which makes them very prone to friendship.

If they do achieve a partnership, it will be based more on friendship than love.

She is too sensitive, something that the Scorpio does not appreciate and that can hurt their relationship a lot. The Piscean is also sincere, a quality that the Scorpio, who is more mysterious, lacks.


The shared element of Water in both signs: what brings them together

Highly emotional and highly intuitive, both can talk to each other with their eyes as if they have their own private unspoken language.

Both the Scorpio man and the Pisces woman crave honesty and commitment in a relationship. If they trust each other, then their chemistry can be the best of all combinations.

They share an intensity and closeness so deep that they almost live as one soul with two bodies. But if they lose trust in each other, then their life can become hell overnight.

The Scorpio man can be very suspicious if he doesn't trust his wife and the Pisces woman is the type to run away to seek relief.

Compatibility will be known from the beginning of your relationship, things are unlikely to change over time if it all started badly.

Over time they will have their ups and downs due to their highly emotional nature, but both manage to compensate in a fun and loving way.

The Scorpio man is a very intense, determined and strong person. He has his own sense of conviction and justification.

A Scorpio man often stands out from the crowd because of his magnetic personality and sexual charm.
He
appears calm and serene on the outside, but there are often a million storms running through his mind. A Scorpio man is a deep thinker.

He is always very passionate about achieving his goals in life.

A Scorpio man proves to be the ideal partner for all women, as they are very loyal, sexually active and dedicated to a relationship.

Although a Scorpio may seem very good initially, they become very possessive and attached later on in the relationship.

In a relationship with a Pisces woman, the Scorpio man does not like her need for space in the relationship. When he is in a relationship, he needs to know that he is with a partner who will be stable and substantial.

She can be quite naive and unrealistic about the people around her because of her own innocence and her belief in the goodness of others.

A Pisces woman can conform to her lover'
s likes and dislikes and is therefore considered a wonderful companion for many zodiac signs.

She respects her man completely although she cannot express herself very well. She can have many mood swings, especially because she does not have very good self-esteem.

When she is in a relationship with a Scorpio man, she knows herself better as the Scorpio man helps her deal with her self-esteem and guides her to find her own dreams.

The Pisces woman understands the power of words. She knows how rude words can hurt someone. She uses her words carefully and makes sure she doesn't hurt anyone with her words.

She has never been heard to be rude and mean to anyone. With this careful nature of hers, she manages to balance her Scorpio man's temper with ease.

She never speaks rude words even when she speaks, and this automatically calms him down.

She is a very elegant lady and pays attention to details. She always makes sure that she looks her best in her jewellery, clothes and general appearance.

The Scorpio man is quite stern and strong and the Pisces woman is the ideal partner for him.

When making decisions, he tends to stray in all directions and needs the stability and support of his strong partner to help him make the right choices in life.

The Pisces woman is a very patient listener and the Scorpio man can talk to her and confide in her about almost anything. He fully trusts their relationship and can share his innermost feelings and confide in her. He expects a lot from his love and the Pisces woman is able to fulfil all his requirements. She is also very optimistic and liberal with her man's choice of career and also with his private life.

Although the Pisces woman seems to be quite absent-minded, she is actually quite intelligent in her thoughts and ideas.

Theirs is a bond that is so full of perfect
aspects that it seems to have been made from the perfect mould. They have a deep connection with love, intellect and financial matters. You are both in awe of your perfect bond and often find it quite mysterious to feel so good about someone. They are like two soul mates whose match has been made in heaven.

They just need to refrain from keeping secrets from each other and also use communication as a powerful tool in their relationship. If they are dishonest with each other, it will lead to lack of attention resulting in jealousy and suspicion.

The Scorpio man can be very aggressive and inflexible at times, but the Pisces woman gives him a proper balance in life.
Over
time, both are able to read each other
's thoughts. Both love harmony and take pride in owning each other thoroughly in the relationship.

As time goes by, the Scorpio man becomes less suspicious and the Pisces woman becomes stronger.

They are so compatible and deeply in love that they get jealous looks from people wherever they go and form a very famous couple among their friends and relatives.

Are they sexually compatible?

Their sexual chemistry and compatibility can be called magical as the Scorpio man has a natural intensity and capacity to love the Pisces woman and she has a willingness to give herself completely to her man.

The Pisces woman gives her body, soul, mind and heart to her Scorpio man and he is touched by her trust in him. They can stay together forever because of their deep connection.

The Scorpio man is very passionate in lovemaking and the Pisces woman, in turn, responds beautifully by arousing him to the deepest core. He gives her a complete sense of security in his life.

While in bed, they both feel the purity of mutual love and their ability to please each other.

Their physical intimacy in bed is on a very emotional level. The Scorpio man offers his warmth and enjoys the gentleness of his Pisces woman. They use their sexual intimacy to fix any problems in their relationship.

Problems in their relationship

As every relationship has some problems, so does the Scorpio man and the Pisces woman.

The Scorpio man also has the tendency to make up for his bad temper in a very sweet way later on as soon as he realises it.

The Pisces woman by birth is a natural
dummy. She has the ability to soothe her Scorpio man and relieve him of his mental stress.

The Scorpio man literally adores his Pisces wife for this quality of hers. There are some Scorpios who are very verbal in their expression of gratitude while others are very non-verbal. However, he is, he will be sure to thank her in his own way.

Both of you can connect on a very deep and spiritual level. In the Pisces woman, you will be able to satiate her need for emotional stability. The Pisces
woman loves to dream, while the Scorpio man is more pragmatic.

He encourages her and helps her to achieve her goals in life. He often feels like returning all the love and encouragement she has given him in her life.

The Pisces woman needs help in making decisions and the Scorpio man helps her in each of her decisions. He does not find this habit of hers irritating, but on the contrary, he loves to help her.

The Pisces woman also has a dangerous tendency to flirt, which can cause many problems in her life. She could be completely harmless in her intentions, but the Scorpio man gets very angry if his woman flirts with someone else besides him.

Men find the Pisces woman very attractive and often stare at her for longer than necessary and even this creates problems between the Scorpio man and the Pisces woman. Apart from this probability, there are no other major problems in their relationship.

The Pisces woman should be careful not to let her Scorpio man see her flirting. At times, the Scorpio man could become a little irritated by his Pisces woman's inability to make decisions regarding her ambitions.

Although he loves to help her decide, her instability irritates him. He can be very brutal with his comments which could hurt the Pisces woman very much. When such an argument occurs, either of them should make the first move and recover quickly.

They can achieve a good relationship

Despite the problems I detailed above, Scorpio and Pisces can also make an excellent couple. The loyal and gentle nature of the Pisces is good for Scorpio because Scorpio is hesitant to trust.
Also, Scorpio wants to be a leader and Pisces is content to follow. Scorpio wants to take the reins and Pisces is much more adaptable to a partner's needs and desires. Scorpio is strong and protective, and Pisces is willing to be vulnerable.
Also, Pisces is very romantic and complements Scorpio's passionate nature. Sex works well because they are both very emotional, so lovemaking is full of passion.

Finally, both are prone to dramatic mood swings; they alternate between highs and lows, so they can understand the emotional nature of their partners. Of course, the intense ups and downs in their relationships can lead to drama.