The horoscope gives the Leo-Aquarius bond a low love compatibility. But all is not lost. Let's go to the negative points first. This relationship is explosive... they a... , 2020-10-11 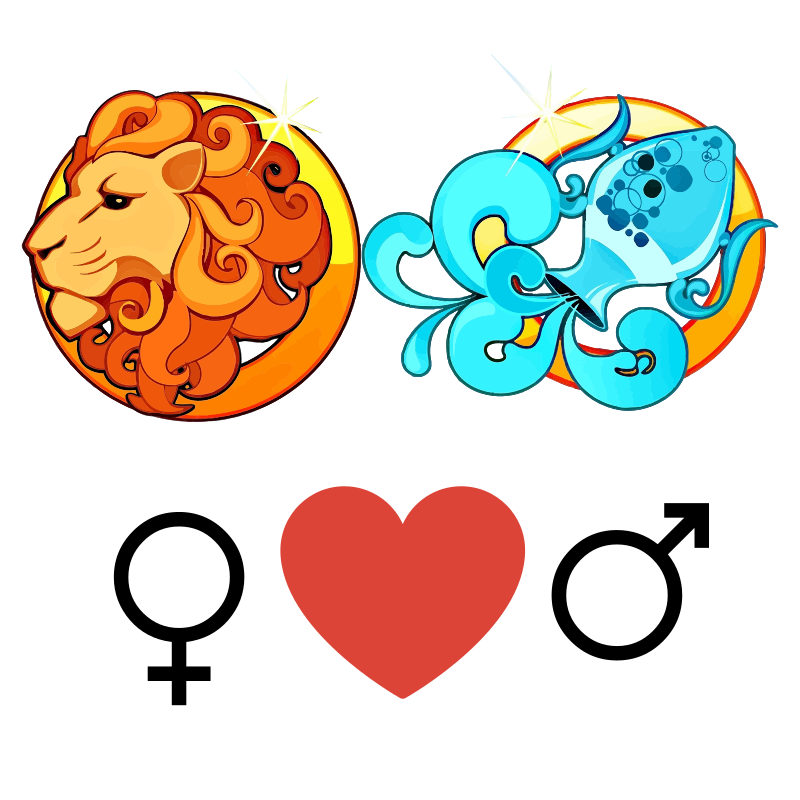 The horoscope gives the Leo-Aquarius bond a low love compatibility. But all is not lost. Let's go to the negative points first.

This relationship is explosive... they are not compatible for the horoscope. The exception is if they start their relationship as a friendship, as we will explain later.

While their personalities may be attractive to each other at first, over time the relationship tends not to work.

The Leo woman is proud and does not admit mistakes, while the Aquarian is eccentric and affectionate. Both will eventually realise that the relationship may not prosper.

They are very different from each other and will not find stability in a love relationship.

There are many ways to tell if a guy is right for you. Whether you realise it or not, your astrological sign plays a big factor in how compatible you are with a partner. For some people, compatibility is literally written in the stars!

Leo is a fire sign. Leo's are fierce and confident like their pet lion. A Leo will be extremely loyal and optimistic in a relationship. She is also impulsive and passionate, especially in bed. A Leo woman loves to take the initiative but can also become arrogant and stubborn.

She can be overly emotional and let her strong feelings cloud her judgement. However, when she gets into a passionate argument, it is not her style to hold a grudge. She is very forgiving, almost guilt-ridden.

In general, a Leo woman just wants to have a good time and wants to be the life of the party wherever she goes.

Aquarius is an air sign. Aquarius men are outgoing and complex. An Aquarius
man will have many friends, but few will know him on a deep level.

He is creative in how he spends his time and always wants to try something new and exciting. He is a passionate lover and always willing to experiment with new things in the bedroom.

An Aquarius man is faithful, but unreliable and can act badly when he wants to explore new things.

In general, an Aquarius man is always actively seeking adventures and making friends along the way.

Leo Woman and Aquarius Man: friendship will be the best start

A friendship between a Leo woman and an Aquarius man will mean constantly doing something fun and exciting.

They will be the kind of friends who call each other with ridiculous suggestions that no one else would accept. This friendship will be the best party all the time because both Leo women and Aquarius men love to have fun.

Aquarius is notoriously friendly, but a friendship with a Leo will mean that someone will constantly challenge and push the Aquarius to be the best.

Their friendship will foster creative collaboration and pave the way for business partnerships to flourish.

Leo women and Aquarius men have adventurous and exciting souls, so committing to a real relationship is difficult for them. A strong friendship is the best way for a Leo woman and an Aquarius man to get to know each other before taking the leap into dating.

Once
they move beyond being just friends, a Leo woman and an Aquarius man will not need regular dinner and movie dates like a normal couple. Instead, extravagant trips to fancy restaurants would be a more suitable way to win a Leo woman's heart, especially if there are plenty of people around to see them.

To keep an Aquarius man pleased, dates would have to include some excitement like ziplining or hiking to the top of the highest mountain in the area.

Fortunately, the Leo woman is generally willing to try new things. Leo and Aquarius have some compatibility, but they can still fight. Both are extremely passionate about what they believe in, so their fights will be explosive.

Because Aquarius men tend to be more difficult to decipher in terms of their deeper emotions, Leo women may become frustrated that their Aquarius lovers will not open up to them.

Leo women tend to be open and dramatic with their feelings, so being with someone who can't express themselves can take its toll on a Leo.

On the other hand, a Leo's constant emotions can upset an Aquarius man. When they fight, a Leo and Aquarius couple will fight passionately and loudly.
Neither of these signs is likely to hold grudges, but that doesn't mean they won't bring up their fights as heavy ammunition in the future. Because of the extreme passion on both sides, when they do, it will be intense.

A relationship between a Leo woman and an Aquarius man will be exclusive. Although Leo women can be flirtatious, they are also extremely loyal when in a relationship.

She may bat her eyelashes at some guys when they are away from home, but she will never stray from her Aquarius lover.

Aquarius men don't tend to get jealous, but Leo women do. Because Aquarius men have many friends, a Leo woman may feel secondary and she definitely doesn't like to feel that way.

When in a relationship, an Aquarius man should do everything he can to make sure his Leo girl feels like the most important thing. She will love him for it!

A relationship between a Leo woman and an Aquarius man will be fun and exciting, even with the tense moments these opposite signs are sure to see.

The good definitely outweighs the bad with this pairing.

When it comes to sex, the Leo woman and the Aquarius man are in an amazing
moment. Both are open to trying new things, which means there is plenty of room for experimentation in bed.

Both will be willing to try new and exciting things like bringing in toys or incorporating bondage and other things to spice up their sex life.

This couple is likely to experience sex outside the bedroom as well. The adventurous Aquarius will be the first to suggest trying public or outdoor sex and the Leo, open to almost anything, will agree to exciting new places to experience hot sex.

One problem Leo and Aquarius may encounter is that they compete for dominance. Both Leo and Aquarius signs want to be in charge, so when they get together in bed, it's a battle of who can take the initiative.

The Leo, being the dominant lioness, is likely to win the battle most of the time. However, once they get over the dominance issue, Leo and Aquarius sexual experiences will be one of the best.

In marriage, a Leo woman and an Aquarius man will need a stability that is not present in their casual partnership.

A Leo and Aquarius couple will reconcile and break up a lot because of their stubborn attitudes and constant need to be doing something exciting.

Once married, the couple has to settle down and create roots, something that might scare an Aquarius man at first; but he will come to value a permanent
partner who pushes him and engages him in a compelling conversation.

As long as both sides of the relationship pay attention to each other's needs and desires rather than constantly fighting for the upper hand, the marriage will be quite successful.

The good thing about a marriage between a Leo and an Aquarius is that both are intellectual and value communication and independence. These traits help immensely when the fiery passion of the relationship heats up and the couple has to learn what, beyond sex, they should nurture with their relationship.

Conversations between Leo and Aquarius are intelligent and fun, creating a comfortable marriage for the couple.

If the Leo and Aquarius couple decide to have children, they will make excellent parents together. The Leo
woman will give her children affection and gifts. She likes to feel valued and needed, so she likes to take care of the children, as long as they seem grateful for everything she does. Like the lioness, the Leo mother will be extremely protective of her young and will constantly ensure their safety and happiness.

She is an emotional person who cares deeply about the people in her life, especially her children; and so she wants to make sure they are happy, healthy and receive the absolute
best attention, even if that means spoiling them with extravagant gifts.

To balance the doting mother, the Aquarius father will be the fun, aloof father who encourages creativity and experimentation in his children. Aquarius
men are all about thinking outside the box and will encourage their children to do the same.

However, when children have a problem that requires emotional conversation, it will be the Leo mother's job to assess and react to the situation.

Even with their children, Aquarius men tend to avoid emotions. However, if the children need help with homework or want to talk about current events, they will turn to their Aquarius father rather than their Leo mother.
Family
holidays are likely to be similar to the dates favoured by the Leo and Aquarius couple. Taking the children with them on a hike or rafting trip is exactly what this couple would do. Still, the Leo mother will become more restless when the children are involved with just her and her Aquarius lover. She will eventually accept the adventures, usually after the children make her feel valued by asking permission, and she will enjoy it even more with her whole family than she did when it was just the couple.

So, are Leo women and Aquarius men compatible?

Friendships between Leo women and Aquarius men are the easiest to maintain because they have the ability to distance themselves when necessary, but can always be called upon when adventure awaits.

Once the couple moves from friendship to relationship, things become more complicated. Leo and Aquarius are opposite signs and opposites attract in passionate romance, but sometimes the personalities of these two signs can clash.

It is important for the couple to maintain boundaries and encourage open communication to avoid any problems from which they cannot recover.

If the Leo and Aquarius couple moves into marriage, the middle ground is even more essential to make it work.

A marriage between these two signs is absolutely possible if both halves of the relationship are willing to put in the work.

Once they do, they will have an extremely successful marriage and will find that they make an excellent parenting
team if they decide to have children.

Leo and Aquarius are great together and destructive when they argue, but they can be successful in relationships if they understand their strengths and weaknesses and work to overcome them.